As economic growth decelerates, and the manufacturing sector struggles amid lower global trade, Western Europe expects to close the year with a 2.7% increase in insolvencies.

This marks the first annual increase for the region in years and is the bleakest regional outlook. In 2020, the financial stability of businesses in the region is expected to worsen with insolvencies climbing an additional 0.7%. an additional 0.7%. Slowing economic growth, the escalation of the US-China trade war, and looming uncertainty surrounding the future relations between the UK and the EU are the key drivers of the upswing in business failures across Western Europe.

On average, 60.4% of the total value of the sales of suppliers surveyed in Western Europe made to B2B customers are on credit (up from 41.4% last year). This compares to 67.2% in Eastern Europe, 50.9% in the Americas and 55.5% in Asia-Pacific (up from 38.8%, 45.8% and 48.1% last year respectively). The marked increase in the average proportion of sales made on credit by respondents in Western Europe is highly likely to be a reflection of the efforts of businesses to sustain domestic demand, and to enhance their competitiveness on export markets. Against this backdrop, however, the use of B2B trade credit varies markedly across the countries surveyed in Western Europe. Respondents in Denmark seem to be the most likely to offer credit to their customers (75.5% of the total value of their B2B sales was reported to be transacted on credit, up from 61.5% last year). Across the other countries surveyed in the region, the proportion of B2B sales made on credit ranges from a high of 68.1% (up from 64.1% last year) in Greece to a low of 44.6% by suppliers surveyed in France (up from 31.6%).

Despite offering customers credit far more frequently than one year ago, a large proportion of the respondents in Western Europe do not appear to be equally inclined to give B2B customers a longer period to pay invoices. This is evidenced by the wide range of payment terms. The average payment terms of suppliers surveyed in Spain, are 48 days from invoicing (47 days last year), in France (34 days versus 33 days last year), the Netherlands (28 days versus 27 days one year ago) and Germany (22 days compared to 21 days last year).  Not unexpectedly due to the ongoing uncertainty surrounding Brexit and the related bleak insolvency outlook for the UK and Ireland, suppliers surveyed in both countries requested payments much earlier than last year. In the UK, average payment terms stand at 20 days (down from 24 days last year) and in Ireland at 28 days (down from 31 one year ago). These are the only two countries surveyed in which average payment terms are shorter than in last year’s survey. In the remaining countries surveyed in Western Europe, on the contrary, suppliers surveyed appear to be inclined to extend more lenient terms than last year to settle invoices. This ranges from a high of 66 days in Greece (up from 62 last year) to a low of 27 days in Denmark (up from 23 days one year ago). The regional average for Western Europe of 34 days (up from 32 days last year) compares to an average of 32 days in both the Americas and Asia Pacific, and 37 days in Eastern Europe.

As survey findings reveal, the most commonly used credit management policies of suppliers surveyed in Western Europe focus on the assessment of a prospective buyer’s creditworthiness prior to any decision to sell on credit. In particular, the survey data shows that respondents from Greece (53%), Germany (45%), Italy (42%) and Austria (41%) perform creditworthiness checks significantly more often than their Western European peers do (35%). The second most popular credit management technique in Western Europe is the use of dunning letters (outstanding invoice reminders). 28% of respondents in the region dun. On a country level, dunning is most frequently performed by respondents from Greece, Austria, Germany and Switzerland (39% of respondents on average). The 28% regional average is well below the 36% average of Eastern Europe but well above the 18% average of both the Americas and Asia-Pacific regions where reserving against bad debts is the second most popular method for managing trade credit risk.

The UK is the most impacted by late payments from B2B customers: Denmark the least impacted

Suppliers surveyed in Western Europe cash in overdue invoices earlier than one year ago, on average within 51 days of invoicing, down from 57 last year. This reflects improved payment timings from B2B customers, resulting in an average of 67.5% of invoices paid on time up from 60.1% last year. Despite this, an average of 29.9% of the total value of the B2B invoices issued over the past year remained unpaid at the due date. By country, this percentage climbs to a high of 35.1% in the UK, followed by Greece at 34.8%, and dropping to 20.3% in Denmark. Across all the other countries surveyed in Western Europe, the proportion of past due B2B invoices ranges from a high of 32.3% in France to a low of 23.6% in the Netherlands. As to the average invoice to cash turnaround, suppliers surveyed in Germany appear to be the quickest to cash in overdue payments (on average 36 days from invoicing, down from 40 days last year), whereas those in Greece are the slowest (on average 83 days from invoicing, down from 96 last year). For 58% of the respondents in Western Europe, late payments from B2B customers had a significant impact on their business. To manage liquidity issues arising from untimely payment of invoices, most suppliers surveyed either delayed payment to their own suppliers or took specific measures to correct cash flow and ensure the continuity of the business (27% of respondents in each case). This was most often the case for respondents in the UK (45%).

55% of the suppliers surveyed in Western Europe believe their customers’ payment practices will not change notably over the coming months. Respondents in Denmark (70%) appear to be the most confident in this respect. In contrast, a quarter of the suppliers surveyed in the region, expect customers’ payment practices to deteriorate markedly over the coming months, ultimately triggering a significant increase in overdue invoices with a consequent negative impact on days sales outstanding (DSO). Respondents from the UK and Ireland (32% alike) are the most pessimistic in this respect. To better protect their receivables from the risk of customer payment default, Western European respondents reported they plan on checking buyers’ creditworthiness and sending dunning letters more often (45% of respondents alike). At the same time, respondents said they will increase buyers’ credit risk monitoring and request secured forms of payment more frequently (both 43%) and sell more often on cash terms (42%). Due to the already felt impact of lower economic growth and political and trade uncertainty on businesses financial stability, a sizeable percentage of respondents in Western Europe (25%) are concerned that access to external borrowing could become more difficult over the coming months. Should this be the case in the short to medium term, 31% of respondents said they would offset the expected increase in capital costs mainly by reducing investment in business growth and workforce, this latter through layoffs or hiring freezes. 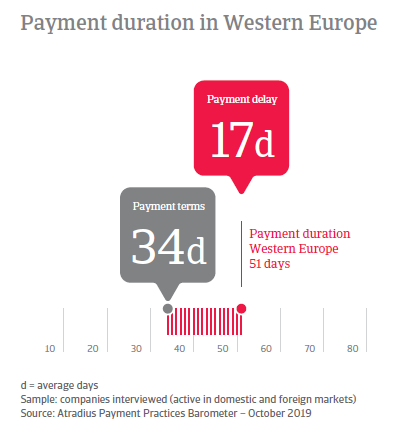 Over the past year, the payment habits of B2B customers across all of the business sectors surveyed in Western Europe (manufacturing, wholesale/retail/distribution and services) improved. This resulted in increased on-time payments, particularly in the wholesale/retail/distribution sector where the proportion of invoices paid by the due date increased to 64% from 55% last year. This compares to 65% of paid on time invoices (up from 61% one year ago) in the manufacturing sector and to 73% (up from 65% last year) in the services sector. Consequently, suppliers surveyed in the region could cash in past due payments on average 6 days earlier than last year, namely within 55 days from invoicing for both the manufacturing and the wholesale/retail/distribution sectors, and within 41 days in the services sector. However, an average of 31% of B2B invoices in both the manufacturing and the wholesale/retail/distribution sectors, and an average of 24% in the services sector, remained outstanding at the due date. Across the region, above average proportions of past due invoices are recorded in the machines (33%) and construction materials (32%) sectors. The services sector recorded the lowest proportion of past due invoices (20%). The consumer durables, food, paper, textile and agriculture sectors also recorded overdue payment averages that were lower than the 25% regional average. For a detailed overview of trade credit risk by country, please refer to the dedicated country reports forming the 2019 edition of the Atradius Payment Practices Barometer for Western Europe.

Uncollectable receivables notably higher in 2019: highest in the manufacturing sector and in the agricultural industry

With an average of 36 days from invoicing (up from 33 days last year), respondents from Western European SMEs gave their B2B customers the longest to settle invoices. This compares to the average 34 days (down from 38 days one year ago) extended by large enterprises, and to the average 31 days (up from 27 days last year) set by respondents from micro enterprises. For a detailed overview by country, please refer to the dedicated country reports forming the 2019 edition of the Atradius Payment Practices Barometer for Western Europe.

Despite being the quickest in collecting past due payments, micro enterprises in Western Europe recorded an increase in the proportion of B2B receivables written off as uncollectable to 1.4%, up from less than 1% last year. SMEs and large enterprises wrote off, on average, 2.6% and 2.4% respectively (up from 1.6% and 1.4% last year respectively). This increase suggests that when invoice payment drags on they are increasingly more unlikely to be paid this year than they were last year. Should this trend continue, we could be looking at a period of declining or negative margins and the already forecast rising insolvencies. For a detailed overview of the proportion of uncollectable receivables by country, please refer to the dedicated country reports forming the 2019 edition of the Atradius Payment Practices Barometer for Western Europe.

Andreas Tesch, Member of the Management Board and Chief Market Officer of Atradius, commented on the report: “No end to challenging times is in sight this year, and the forecast for next year is not positive either. The global business environment has inevitably deteriorated and is expected to remain troublesome over the coming months. Insolvencies are expected to increase again in 2020, putting the financial stability of businesses under severe strain.

In particular, the 2.6% slowdown of the global economy expected this year will mark a reversal in the downward trend of annual insolvencies since the financial crisis of a decade ago. The upward revision arises mainly from a significant worsening of the insolvency environment in North America and Asia Pacific, where slowing domestic GDP and trade growth ticks up corporate insolvencies.

Western Europe, of course, is not immune to this. Here, the number of businesses going bankrupt is forecast to increase this year and next, posing an increased risk to financial stability and corporate solvency. And as our survey shows, businesses are aware of that and seek protection from the risk of customers’ payment default. In this respect, credit insurance represents the most comprehensive solution that can help suppliers seize trade opportunities, regardless of challenging times, and turn them into ways to achieve profitable business growth. By managing cash flow successfully, businesses can reduce the risk of a devastating financial loss caused by an insolvent buyer”.

Are you interested in a report on another region?

Italy: insolvencies again on the rise after some years

In Italy, business insolvencies are expected to increase in 2019, by about 4%. This is due to economic stagnation, increased political uncertainty and tighter credit conditions.

GDP growth in the Netherlands is expected to slow to 1.7% in 2019. After several years of sharp decreases in insolvencies, this year is likely to mark a turning point.