Despite an expected GDP growth rate of more than 5% in 2017 structural weaknesses remain, and firms are increasingly vulnerable to currency volatility. 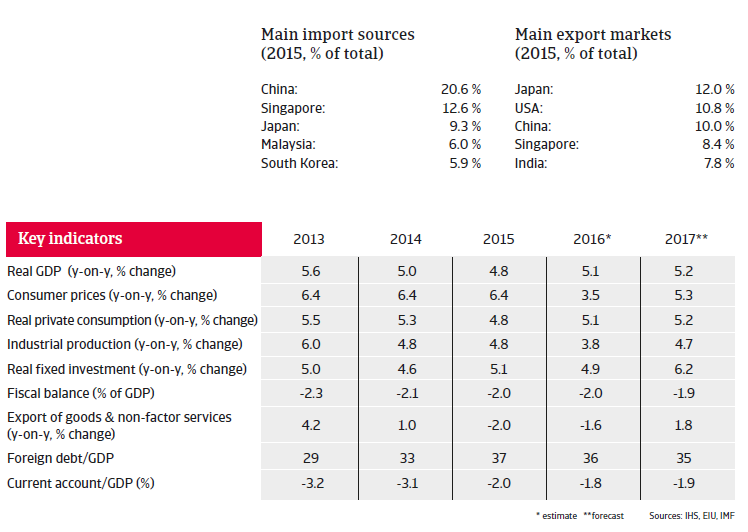 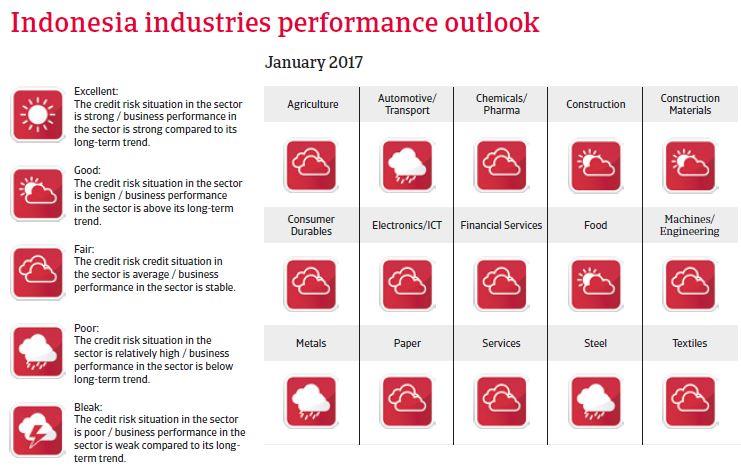 President Joko Widodo (popularly known as ‘Jokowi’) has proved to be a successful reformer and fighter against corruption in his former offices (e.g. governor of Jakarta). However, his centre-left PDI-P party holds less than 20% of the seats in parliament, while the entire minority coalition only holds 44%. Until recently, this has led to slow implementation of announced reforms (improving the infrastructure, increasing foreign investment and combatting corruption). However, a recent realignment of parliamentary support means that Jokowi's coalition support in the legislature has increased.

The three main parties - DP, Golkar and PDI-P - endorse the Pancasila principle and thus the secular character of Indonesian politics. But the influence of fundamentalist Islam on the society has increased gradually in the last couple of years, leading to intolerance against certain sects and the Christian minority.

Overlapping claims for maritime rights and interests in the South China Sea have recently caused slight tensions with China, but the overall relationship remains stable. 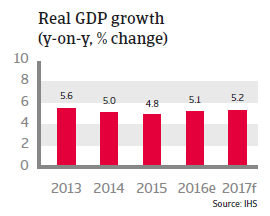 Indonesia is a large and relatively closed economy. Structurally it is vulnerable to external shocks, due to a high dependency on commodity exports (which account for more than 60% of exports), its dependence on oil imports and a high stock of inward portfolio investment.

GDP growth is expected to remain above 5% in 2017, mainly based on expansion of private consumption, improved economic policies and a rebound in investor confidence. The government has announced deregulations and fiscal incentives in order to attract more foreign direct investment (FDI) and to encourage credit growth. Inflation has decreased in 2016, mainly due to the  new found stability of the rupiah, which has outweighed the effects of monetary loosening in H2 of 2016. 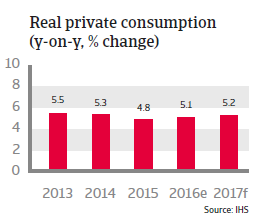 Indonesia´s economic fundamentals remain robust. Public finances are stable, with good solvency, despite the negative impact of lower revenues from commodity exports and a structurally low tax base. The government has scrapped and/or lowered subsidies on energy since 2015, keeping the budget deficit under control (expected to remain at about 2% of GDP in the short term).

Public debt remains rather low, at around 30% of GDP. The government has been successful in funding its deficits via bond issuances at relatively low rates. 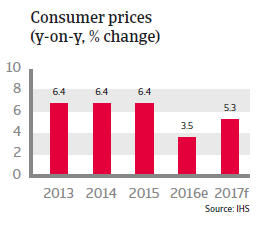 The foreign debt level, currently at about 35% of GDP, remains manageable, although debt service is relatively high. Liquidity is sufficient to cover imports, as import cover remains well below the three-month threshold.

The Indonesian banking sector remains resilient. Non-performing loans are low at around 2.5% and capitalisation is strong, with a capital adequacy ratio (CAR) of more than 20%. However, there are some small- and medium-sized banks that run counter to this generally positive assessment and would be vulnerable to a liquidity shock. 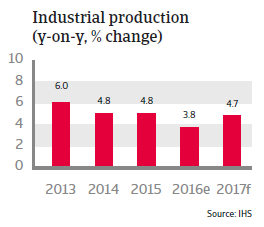 While average annual GDP growth rates have been stable around 5.5% since 2000 and certain reforms are on-going, there are still deep structural problems. Red tape, widespread corruption, a poor legal system, an inflexible labour market and poor infrastructure keep the growth rate below its potential.

Still many industries remain barred from foreign investment, and Indonesia´s decentralisation after the end of the authoritarian rule of President Suharto still impedes policy coordination for infrastructure development, often leading to spending inefficiencies. 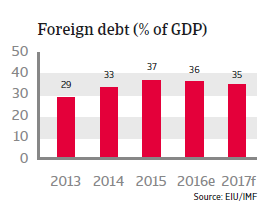 Despite generally sound economic fundamentals, Indonesia’s external position is currently more vulnerable than in the past. Indonesia is highly dependent on portfolio investments for financing its persistent current accounts deficits and increased private sector external debt, which makes the economy vulnerable to further monetary tightening in the US and the resulting impact on capital flows to and from emerging markets in general. In 2013/2014 Indonesia already experienced a massive international capital outflow when the local currency came under pressure, as the US Federal Reserve tapered its bond-buying programme and foreign investors sold off financial assets and shares. That said, Indonesia´s vulnerability to shifts in investor sentiment is somehow mitigated by sound monetary policies and the fact that a large part of public external debt is long term.

While the overall economy is generally shielded from major repercussions due to a relatively low foreign debt level and strong access to capital, Indonesian firms are increasingly vulnerable to currency volatility. This is because of their large share of external debt: Indonesian corporate external debt has more than doubled since 2010 and currently amounts to more than 70% of total exports, the highest such ratio in the world. This increases refinancing risk for firms and their vulnerability to exchange rate depreciation.