Turkey: the country most affected by late payment

2018 brought many changes in Turkey – more frequent payment delays, increases in the proportion of overdue B2B invoices and DSO, a longer payment duration.

Based on the survey results, 2018 brought many changes for Turkey – more frequent payment delays, increases in the proportion of overdue B2B invoices and DSO, a longer invoice to cash turnaround. The impact of late payment is undeniable, with a notable 31.6% of respondents reporting revenue loss. Like in 2017, Turkey recorded the highest proportion of uncollectable B2B receivables in the region; bankruptcy and failure of collection attempts remain the main reasons for write-offs.

In Turkey, credit sales are considered to be a way to ensure cash flow and expand business domestically. This method of payment is seen as a sure way to gain new business and offer better service to clients. While very inclined to offer credit to domestic B2B customers, 20.0% of respondents in Turkey said that high economic or political risk would result in them refusing to grant credit terms.

Credit sales help us win new customers and brought our company a sales increase of 30%.

Similarly to what was mentioned in regards to domestic B2B customers, Turkish respondents use credit sales with B2B customers abroad because they believe it is a good way to generate sales and expand their activity internationally. The primary reasons why respondents in Turkey would not sell on credit to their foreign B2B customers are high currency risk (mentioned by 40.7% of respondents) and if there is high economic and political risk in the customer’s country (25.9% of respondents).

We sell on credit to our B2B customers abroad because we have overseas customers that we trust and we want to sell more products abroad.

Frequent late payments and an increase in past due invoices 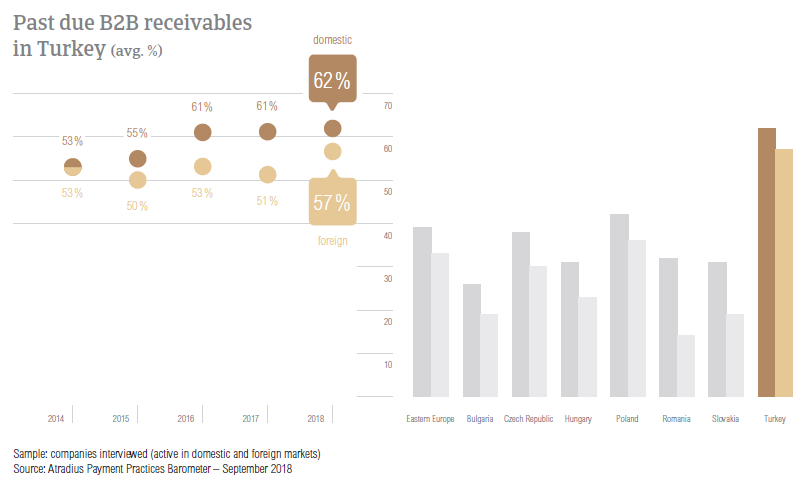 In 2018, the average Days Sales Outstanding (DSO) figure recorded in Turkey is 64 days, nine days shorter than in 2017. Most respondents in Turkey (35.2%) do not expect any changes in their company's DSO over the coming 12 months. However, a high 32.9% of respondents foresee a slight increase. 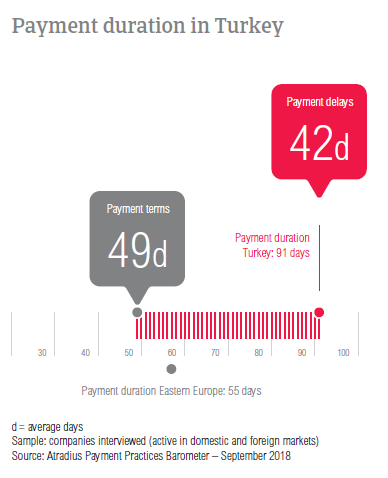 As a result of the changes in payment terms and payment delays, the average payment duration in Turkey increased from 84 days in 2017 to 91 days this year. This was the only country in the region to report an increase and respondents here take the longest time to convert B2B invoices into cash.

In Turkey, domestic payment delays occurred mainly because of insufficient availability of funds and buyers using outstanding invoices as a form of financing (mentioned by 67.2% and 32.2% of respondents respectively). The percentages of respondents who stated these reasons for delays by their domestic B2B customers increased significantly compared to last year.

Looking at the main reasons for payment delays by foreign B2B customers, most respondents in Turkey (49.6%) mentioned the complexity of the payment procedure. This was also the highest percentage of respondents who stated this in Eastern Europe. The second most frequently mentioned reason for payment delays by foreign B2B customers is the inefficiencies of the banking system (mentioned by 39.3% of respondents), again the highest percentage in the region.

Among the Eastern European countries surveyed, Turkey had the highest percentage of respondents (31.6%) who stated that payment delays led to revenue loss. Due to overdue B2B invoices, respondents in Turkey also needed to take specific measures to correct cash flow (38.8% of respondents) and to postpone payments to their own suppliers (38.3% of respondents). Only 18.9% of Turkish respondents said that past due B2B invoices did not affect their businesses significantly.

Open to the use of electronic invoicing

Asked about the effect of e-invoicing on payment duration, the majority of respondents in Turkey (70.5%) said that after invoicing their B2B customers electronically, they received payments quicker. 23.7% of respondents have seen no noteworthy effect and 5.8% noticed a slowdown in payment.

Uncollectable receivables originated most often from B2B customers in these sectors: construction, consumer durables, food, business services and services. A common problem in the entire region – the customer going bankrupt or out of business – was also the main reason for write-offs in Turkey (mentioned by 54.8% of respondents). A slightly lower percentage of respondents (51.2%) mentioned the failure of collection attempts. This reason for write-offs was reported by a significantly higher percentage than in the rest of the Eastern European countries surveyed and is also much higher than in 2017 (46.2%).

B2B customers in consumer durables are some of the slowest payers 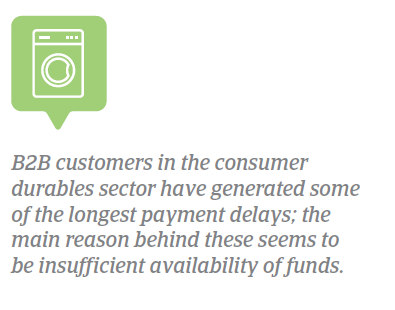 Payment delays and insolvencies are expected to increase in the chemicals sector due to lower sales and the lira depreciation since the end of 2017.

The global economic upswing continues to strengthen but US policy uncertainty and a potential trade war could quickly darken the bright skies.

Despite a minor decrease in overdue B2B invoices, 45.0% of businesses in Eastern Europe reported having to manage the negative impact of payment delays.