GDP growth in the Netherlands is expected to slow to 1.7% in 2019. After several years of sharp decreases in insolvencies, this year is likely to mark a turning point.

Based on survey findings in the Netherlands, respondents transacted 59.5% of B2B sales on credit (up from 38.6% last year). This compares to a 60.4% for Western Europe. The increased use of trade credit in B2B transactions by Dutch businesses appears to be consistent with both resilient domestic demand and their need to support export sales. This is particularly the case now that weak global trade is beginning to impact the Dutch manufacturing sector.

Average payment terms recorded in the Netherlands stand at 28 days from invoicing (27 days last year). These are below the 34-day average for Western Europe. Dutch survey respondents appear reluctant to give B2B customers longer to settle invoices than last year. 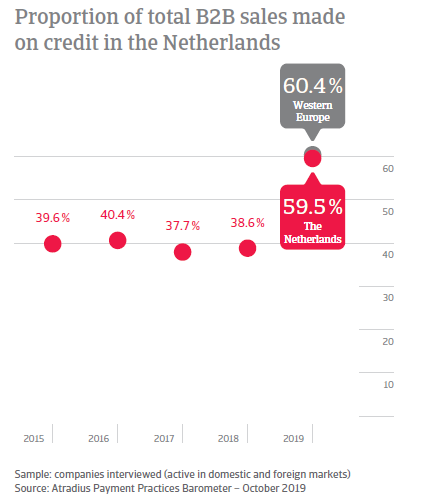 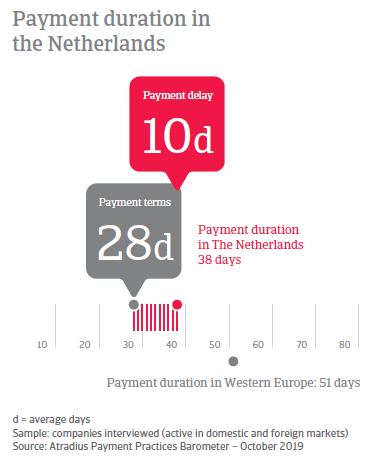 This is likely to be down to a combination of uncertainty over trade policy, higher global financial headwinds and the current economic scenario, which is forecast to cause an increase in insolvencies in the Netherlands. More relaxed payment timings could increase the risk of not getting paid on time, due to the expected worsening of B2B customers’ payment practices over the coming months.

Consistent with the increase in the use of B2B credit with conservative credit terms, along with heightened perceptions of insolvency risk arising from selling on credit in challenging times, Dutch respondents focus on the protection of their business from payment default from customers. The survey shows that, prior to any trade credit decision, the majority of Dutch respondents (28%) perform an assessment of the creditworthiness of prospective buyers. This is lower than the average for Western Europe (35%). Once the invoice becomes overdue, 27% of Dutch respondents undertake dunning activities (outstanding invoice reminders). To collect long overdue receivables, 25% of survey respondents in the Netherlands engage a collections agency. This is far more than in Western Europe (18%).

23.6% of the total value of B2B invoices issued by respondents in the Netherlands over the past year remained outstanding at the due date. This is the second lowest figure recorded in Western Europe (28.9%), after Denmark (20.3%). In line with improved payment practices from B2B customers, resulting in increased timely payments (74.2% of invoices paid on time compared to 65.7% last year), respondents in the Netherlands cash in overdue invoices earlier than one year ago (37 days down from 41 days last year). This variation is consistent with observations for the region overall, where payment duration decreased on average to 51 days down from 57 days last year. Consistent with their sharp focus on receivables’ management, most of the respondents in the Netherlands (57%, compared to 42% in Western Europe) reported no significant impact on business arising from late payments from customers. In contrast, 25% of Dutch respondents (versus 26% in Western Europe) reported they needed to take specific measures to make up for liquidity constraints arising from untimely settlement of invoices. Compared to the same survey period one year ago, Dutch respondents appear to be less efficient when it comes to the collection of long-term past due invoices. Survey findings reveal that the proportion of write-offs of uncollectable accounts increased to 1.3% (up from less than 1% last year). This compares to a 2.2% average for Western Europe.

61% of survey respondents in the Netherlands (55% in Western Europe) believe their B2B customers’ payment practices will not change significantly over the coming months. In contrast, 19% of respondents expect their B2B customers’ payment behaviour to deteriorate over the same time frame. In particular, the expected deterioration is forecast to result in an increase in long-term overdue invoices (over 90 days past due) and ultimately in higher average days sales outstanding (DSO). To strengthen their receivables management and improve protection of business profitability against the risk of insolvency from customers, 54% of Dutch respondents plan on performing checks of their customers credit quality more often. 50% plan on undertaking dunning activities on a more regular basis to increase the efficiency of collection of overdue receivables.  46% of Dutch respondents believe access to bank financing will not be more difficult over the coming months. However, 22% of respondents do not share this opinion and say that tighter financing conditions will cause them to delay business investment (49% of respondents, compared to 33% in Western Europe).

Overview of payment practices in the Netherlands

Based on survey findings in the Netherlands, the longest payment terms to B2B customers are found in the agri-food sector (on average 35 days from invoicing). Average payment terms across the other sectors surveyed in the Netherlands range from 28 days in the transport sector, to 25 days in both the ICT and electronics sectors. At the lower end of the scale is the consumer durables sector, which is given an average of 15 days to settle invoices.

With an average of 31% of the total value of invoices remaining unpaid at the due date, the Dutch agri-food sector has the greatest proportion of late B2B payments in the Netherlands. Across the other sectors surveyed in the country, the percentage of overdue invoices ranges from an average of 28% in both the construction and consumer durables sectors to 18% in the services sector. The credit risk trend in the Dutch transport sector deteriorated over the past year, due to a sizeable decrease in the proportion of timely payments (70.8% of invoices paid on time compared to 77.5% last year).

The ICT/electronics and the machines sectors in the Netherlands recorded the highest proportion of B2B receivables written off as uncollectable (2.2% each). In contrast, over the past year there was a significant improvement in the collection of overdue receivables in the consumer durables sector, with a corresponding decrease of write-offs to less than 1% of the B2B sales on credit. Also the services sector in the Netherland records on average <1% of receivables written off as uncollectable. 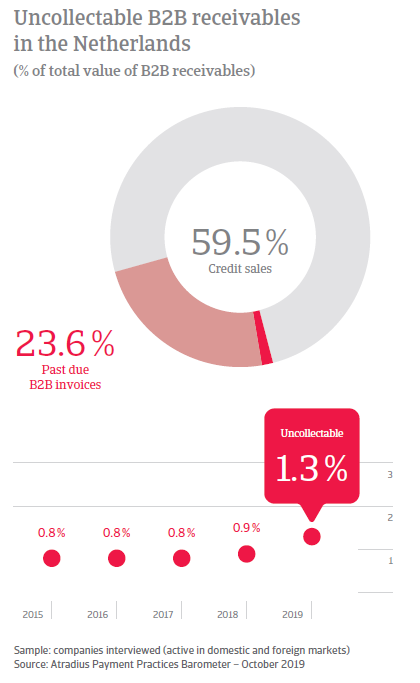 Tom Kaars Sijpesteijn, Atradius Country Manager for the Netherlands, commented on the report: “Our survey shows that over 60% of businesses interviewed in the country believe the payment practices of their B2B customers will not change significantly over the coming months. This opinion is likely to be a reflection of the currently robust Dutch economy, where growth is supported by high consumer confidence, a strong labour market and increasing purchasing power.

However, the risks have clearly increased and the economic climate has undeniably deteriorated. Global GDP growth is forecast to slow to 2.6% this year, with the escalation of the US-China trade war as the main culprit. World trade growth continues to decelerate, and the outlook remains bleak.

The effects of the global slowdown are being felt in all regions worldwide, including Western Europe. Here, also due to the economic contraction in Germany, it seems inevitable that the number of bankruptcies will increase over the coming months. This will also be the case for the Netherlands, as the Dutch industry is facing headwinds. In these challenging times, there are still opportunities though and appropriate credit management helps mitigate non-payment risks, enabling safe and profitable business growth.”

In 2019 Dutch export performance is impacted by lower demand from France and Germany, the ongoing Brexit issue and increased global trade uncertainty.

After nearly a decade of annual improvements, 2019 is expected to mark the first year of insolvency growth since the crisis.

Indonesia offers a wealth of business opportunities if you approach the market in the right way. The principles underlined in this report look at how a successful trading relationship can be achieved.