Solid economic growth is expected to continue in 2017 and 2018, but the Brexit decision will most probably affect Dutch industries in the mid-term. 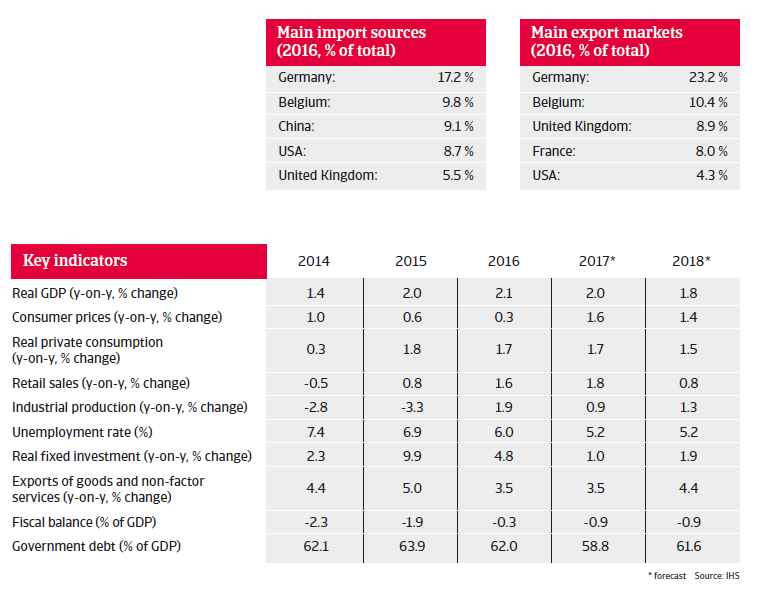 Corporate insolvency decrease expected to slow down in 2017

The economic slowdown in 2012 and 2013 triggered sharp increases in business insolvencies. Due to the economic rebound since 2014 business failures started to decrease again, declining 18.9% to 5,952 cases in 2016, (including sole proprietorships). The positive trend is expected to continue in 2017. 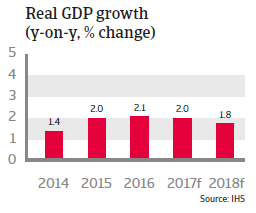 The Dutch economy has gained momentum in 2015 and 2016, and is forecast to continue to grow in 2017 and 2018 by about 2% annually. All spending categories are expected to contribute to the economic expansion. Private consumption benefits from decreasing unemployment (which has decreased substantially over the past three years), an increase in disposable income and a 15% rebound of house prices since 2013. At the same time, inflation will increase to 1.6% in 2017 due to higher energy prices. Dutch exports continue to benefit from higher global demand and the depreciation of the euro. Due to past austerity measures and the on-going economic growth, the budget deficit is expected to remain small or even turn into a surplus in 2017 and 2018.

The Brexit decision will most probably affect Dutch industries in the mid-term, due to close trade and investment ties between the Netherlands and the UK. The sectors to be mainly affected are chemicals, electronics, food and metals.

Compared to the 2016 survey results there has been a reduction in the percentage of both domestic and foreign B2B sales made on credit in the Netherlands.

2017 is a major election year in Europe. Election gains of populist parties could undermine support for European cooperation and threaten reforms.

Competition is high in all segments and price pressure offsets sales volume growth, meaning that the already low profit margins will remain under pressure.