Coronavirus: an unwelcome guest at a bad time

Coronavirus: an unwelcome guest at a bad time | Atradius

The coronavirus outbreak arrives at a time when global growth is already expected to slow and negatively impacts growth and insolvencies.

The Corona virus can cause severe pneumonia as well as respiratory failure and is potentially deadly. The vast majority of cases is in China, where the number of those reported to be affected stands at 79,968, with a death toll of 2,873 as per March 1. The virus has spread to 58 other countries, with the number of reported cases much lower: currently 7,169 cases (8% of the global total) reported, of which 104 deaths. Most affected are South Korea (3,736, of which 18 deaths), Italy (1,128, 29) and Iran (593, 43). The virus has initially spread rapidly in China but has now slowed markedly (0.7% growth day-to-day). In the rest of the world, however, the number of cases has accelerated markedly recently (19% growth day-to-day). The death rate in China is currently 3.5% but seems to have reached a peak. The much lower death rate in the rest of the world has gone up recently and is at 1.5%. For comparison, a flu epidemic would usually cause a 0.1% mortality rate. These figures suggest the picture of a non-synchronised and asymmetric outbreak. 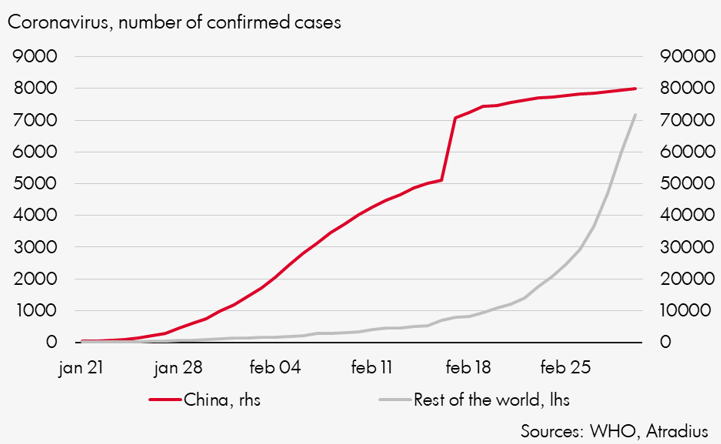 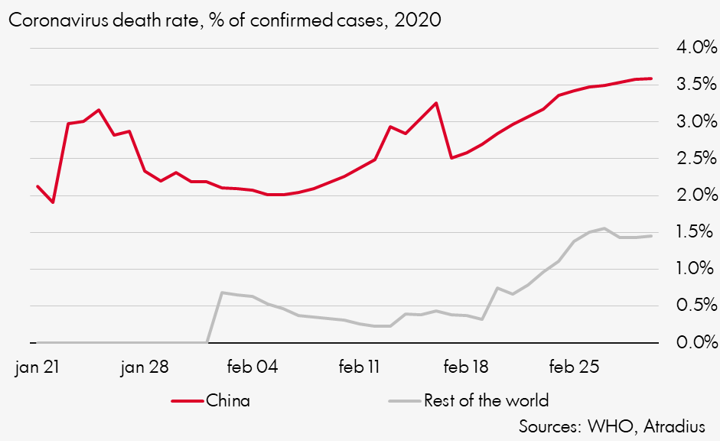 To access how the coronavirus outbreak will impact the world economy, we should understand the impact of the SARS outbreak, another coronavirus, in 2003. This helps paint our baseline outlook. Whereas this pandemic lasted over a period of 8 months, it was only early April 2003 after the Chinese government started to share information with the WHO. After that it took about three months to control it.

China has reacted fairly rapidly in order to contain the spread of the coronavirus. This compares positively to the case of SARS where authorities were slow with preventative measures and information provisioning. Wuhan has declared a travel ban. Public transport was halted, airports closed and expressways blocked. A similar lockdown was also imposed on other cities. Moreover, in Wuhan people are advised to stay indoors. Movement across the country is heavily restricted, affecting the possibility to go to work severely. Resumption of work after the Chinese New Year in various industries was delayed and has only recently been slowly resuming. Sporting events such as the World Championship Athletics have been postponed.

With the SARS reference as well as the current measures taken by the Chinese authorities in mind, our baseline scenario for the coronavirus outbreak in China itself is that it will be relatively short lived, until the end of Q1, and therefore predominantly confined to Q1 (‘Contained scenario’). This is confirmed by the data coming from China on the number of cases, which now show a trend towards stability. But these are two different viruses and the downside risk that it is not contained by the end of this month is high. Therefore, we also consider a more pessimistic scenario (‘Protracted scenario’) in which the situation remains out of control until the end of June.

That is the picture for China. The rest of the world shows a different picture, indeed an accelerating pace, but from a low level and clustered in a few countries, notably South Korea and Italy. We assume that for these countries the Corona virus will have a similar relatively short life as well, will be more limited, and lags the development of the Chinese outbreak. That the outbreak will be more limited is based on our assumption of the quality of public health in particularly OECD countries as well as learning effects from the measures that the Chinese authorities have taken. The much lower death rate of the corona virus outside China is providing support for this. Our analysis therefore is confined to the impact of the Chinese outbreak.

Projecting this on the current situation, we may consider that consumption contributed about 3.5 percentage points to China's overall real GDP growth rate of 6.1% in 2019. We estimate that if spending on such services fell by 10%, Chinese GDP growth would fall by about 0.3 percentage points annually. This assumes that consumers allocate about 20% of their spending on transport and entertainment.

Whereas in the case of SARS a demand side analysis may have been sufficient, matters are a bit different now. It stems from the severe measures taken by the Chinese authorities to contain the spread of the virus. These carry economic costs on the supply side. Much fewer people are going to work, particularly in the Wuhan area where 85% of the cases have occurred. Wuhan is China's sixth-largest city, with a population of about 11 million. It accounts for about 1.6% of national GDP. As such these figures may not be too worrying and suggest a relatively small macro-level impact. But there are factors that severely complicate this view. First, Wuhan is an important national transport hub, accounting for 1.2% of national freight traffic by weight in 2018. Restricted movement in the vicinity of Wuhan could therefore have broader effects on the movement of goods and people. A second complicating factor is that the city is also a key player in China's auto industry. Wuhan hosts production facilities for seven major domestic and foreign manufacturers, and for hundreds of auto parts suppliers. Complicated supply chains and just-in-time production could mean that production in Wuhan factories have broader spill-over effects.

Fortunately, the Chinese authorities have relatively large room for stimulus via monetary and fiscal policy. This offers some flexibility to soften the economic hit during the outbreak and to stimulate economic recovery after it has been contained. Still, stimulus is constrained by the fairly high levels of debt that have been built up in the economy.

With this in mind, and given our assumption of containment of the outbreak within the period we expect, pent up demand and policy measures may support keeping China’s annual GDP growth at a reasonable level. More particularly, we expect the hit to the first quarter Chinese GDP growth such that it will be brought back by 2 percentage points to 3.8% y-o-y, with the annual figure for 2020 coming in at 5.4% (6%).

These estimates come in with a downward risk as there are questions related to the speed of resumption to normalcy. More in detail, how fast can operations in factories, offices and shops return to normal given that restrictions related to public health due to government regulations as well as fear are still prominent. At the same time, assuming such return to normalcy, the question is whether the outbreak can be contained.

Indeed, if the outbreak takes until end of June to be controlled, the estimate comes in at 4.5% for the full year of 2020. Worse, in case the outbreak is not contained even in 2020, we end up with a Chinese growth figure of below 4.5% and the previously much feared ‘hard landing’ of the Chinese economy will be a fact of life. This however is a scenario which we currently consider not likely at this stage.

The analysis of the impact on the global economy mirrors the one that we have sketched for China. First of all, there is the demand effect stemming from slower Chinese growth. This will transmit to the global economy via trade and commodity price channels. Indeed the prices of those commodities dominated by Chinese demand have indeed decreased. Copper prices have declined by about 18% since mid-January and iron ore is down 10%; China covers 50% and 70% of global demand respectively. Even Brent oil is lower following the outbreak. The latter not only relates to China but transport will take a hit more broadly as travel within, as well as to and from China is restricted. The second impact runs via the supply side. China is the factory of the world. With output under severe pressure, due to factory closures for public health reasons and shortage of workers, exports of Chinese products and semi-finished products is hampered. In the rest of the world, this creates supply shortages because semi-finished products that are sourced from China will not in all cases be easily replaceable.

Assuming the Chinese economy takes a hit of the size discussed above, we can expect serious spill-over effects to the global economy via these channels. China currently accounts for about 20% of global GDP. Under the baseline of a comparatively short-lived outbreak, we should think of an impact of -0.25 percentage point of GDP on an annual basis, bringing it to 2.3% on an annual basis. Regionally, the hit will mostly be felt in Asia, where China clearly weighs heavily with its share of GDP and where trade linkages are strongest: the hit to GDP is -0.5%. The impact will be marginally felt in the US with a -0.1 percentage point adjustment under the baseline at this stage. For the Eurozone the impact is estimated to be -0.2 percentage points, although the most recent outbreak, especially with regards to Italy, will put downward pressure on this forecast. Emerging Asia is mostly affected as the hit is - 0.5 percentage points.

In our November Economic Outlook we have already signalled that 2019 marked a turning point in the trend of the number of insolvencies. This is predominantly due to the very weak GDP growth that materialized in 2019. Indeed for 2019 the number of insolvencies grew 3%. For 2020, we expected a slowdown to 2.3% globally. The outbreak of the coronavirus presses us to change the forecast.

We wish to point out here that our forecasts are based on developments of GDP. They do not take into account the fact that the outbreak causes a shock to the economy, with some sectors more severely hit than others. This puts an upward risk on our forecasts under the two scenarios: the hit to the insolvencies in a badly hit sector will not, or at least insufficiently, be compensated by a lower number in less affected sectors.

In particular, the automotive, electronics, services, and pharmaceuticals will face the shock. The Wuhan area is a centre for manufacturing for both finished vehicles and important automotive parts. Ripple effects are particularly felt in the Asian automotive sector, notably in Japan, Thailand and South Korea. Firms in these countries are unable to source some of the vital parts made in China. Major car exporters such as Germany are also hit by lower demand from China. Disruptions in the (international) value chain in the electronics sector will delay launches and roll-outs of new products. It will impact major electronics producers in Asia, predominantly in Taiwan, Japan, South Korea and Singapore. Factories in Vietnam, India, Malaysia and the Philippines that source parts from China will feel the impact as well. Services, particularly tourism, is impacted in Southeast Asia, and we expect the impact to spread to other regions. The healthcare value chain is another source of concern, with China the top exporter of antibiotics and vitamins and a major provider of raw materials to the US and India for example.

Coronavirus: an unwelcome guest at a bad time

Corporate insolvency growth to accelerate in 2020

Corporate insolvencies are expected to grow 2.4% in 2020, a pronounced acceleration from the 1.4% increase recorded in 2019, largely resulting from the coronavirus outbreak

The global economy is losing steam in 2019 and 2020. As the trade war accelerates this, consumer resilience will help avoid recession.

Despite increasing clouds on the horizon, there remain several bright spots for export opportunities in emerging markets.