The negative effect of Brexit on Irish food businesses is lower than previously expected, as many moved their supply chains away from British towards EU providers.

In 2020 and 2021, consumer spending on food in Irish supermarkets increased, leading to higher profit margins for retailers, food producers and processors alike. Despite the reopening of hospitality after the lockdowns, food sales in supermarkets remained above pre-pandemic levels. The negative effect of Brexit has been lower than previously expected, as many Irish food businesses moved their supply chains away from British towards EU providers. Additionally they managed to increase their sales in the EU. 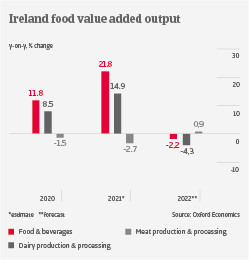 That said, the sector is struggling with higher prices for energy and commodities (in particular grain). While primary producers have been able to pass on higher input costs, food processors (e.g. butchers, bakers) struggle to do the same with retailers, and their profit margins have started to deteriorate. We expect that some bakeries that have fixed price contracts with supermarkets could face troubles in 2022, while labour shortage (in particular in the meat-processing segment) has led to increased labour costs. A partial shutdown since December has hit hospitality again, and will have a negative effect on the performance of beverages, fruits and vegetables, and food services in Q1 of 2022.

Food businesses have made large investments in productivity over the past two years, which has resulted in higher gearing. Banks remain supportive, and have provided covenant waivers for businesses affected by the pandemic. Payments in the sector take about 40 days on average, and payment behaviour has been good over the past couple of years, with a low number of business failures compared to other industries. Insolvencies have been historically low over the past 12 months due to strong government support. However, revenues of hospitality and related food service businesses continue to suffer, with many expected to fail after the expiry of fiscal measures.

In total, we expect food services and hospitality insolvencies to increase by about 25% in 2022, and our underwriting stance remains restrictive for both segments. That said, we remain open for food retailers and businesses active in the dairy and meat businesses.

Further growth in 2022, but mounting troubles for the meat segment

Forecasts anticipate Ireland’s growth in 2022. However, a large proportion of the businesses polled in the country expressed a note of caution. Unknowns over the pandemic are still many.

Higher credit risk for the meat and food services segments